The early Tauchnitz paperbacks from 1842 are now 170 years old, and naturally few have survived. The earliest paperback copy found by Todd & Bowden in any of the collections they examined, seems to be a copy of volume 12, the last of the series of 5 volumes of Byron’s poetry issued as volumes 8 to 12 of the series. They note that this has a list up to volume 21 (published in October 1842) on the back cover, and conclude that it is a later issue.

My guess is that it is in fact a first printing. Although it’s difficult to work out precise dates, it’s clear that the 5 volumes of Byron were not published simultaneously, nor were they all published ahead of later numbered volumes. According to the dates in Todd & Bowden, notice of publication of volume 8 was given in April 1842, of volume 9 in June, volume 10 in July and volume 11 in September. Although no date is given for volume 12, it seems reasonable to guess that it may have been in October, which would make it natural that the first printing would include details of Volumes 1 to 21. I have similar copies of volume 9 (listing up to vol. 15), volume 10 (listing up to 19), and volumes 11 and 12 (listing up to 21). It’s possible that all may be in the earliest state. 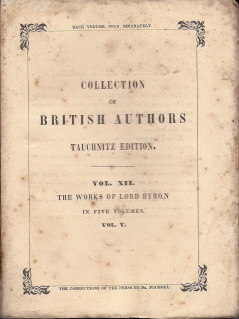 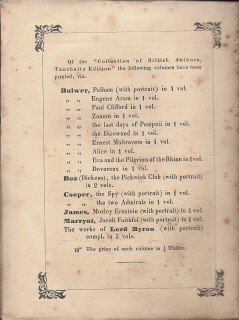 Volume XII, with 21 titles listed on the back

I also have copies though of two even earlier paperbacks, volumes 4 and 7, each listing 7 volumes on the back cover. That makes it likely that volume 7 is in the earliest state, but volume 4 may not be. Publication of this volume was announced at the end of December 1841, with volume 7 not announced until February 1842. There’s another mystery here though. Although the first volume of the series was announced as early as September 1841, the date on the title page for all the early editions (up to volume 32) is 1842. Is it possible that in practice, none of the volumes were issued until early 1842, in which case volumes 1 to 7 may have been listed on the back cover of all the first 7 volumes? There doesn’t appear to have been any practice in later years of using the following year’s date on books published at the end of the year. 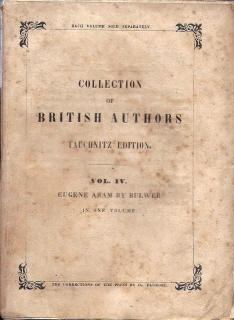 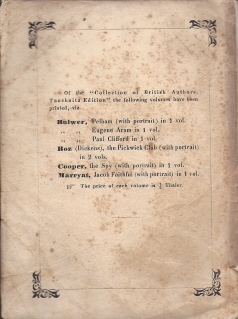 Volume IV, with 7 titles listed on the back

All of the early paperbacks that I have seen are in the state that Todd & Bowden classify as w1b. They speculate that an earlier printing state may exist (w1a) for volumes 1 to 6, which would not refer to ‘corrections of the press by Dr. Fluegel’ on the front wrapper. However neither they nor I have ever found a copy in this state, or any copy listing fewer than 7 volumes on the back wrapper. The only way to prove or disprove it, would be to find such a copy. I would love to hear from anyone who has one!