It’s of course well-known that there was a lot of discrimination against women authors in the Victorian era. It was difficult for them to get published and authors such as George Eliot, and the Bronte sisters had to resort to male pseudonyms. So it comes as no surprise to find that of the first 100 volumes of the Tauchnitz series, 96 of them were by male authors. The only exceptions were 3 volumes by the Countess of Blessington and one by Lady Georgiana Fullerton. Perhaps at that time female members of the aristocracy were accorded the status of honorary males.

It was not long though before things started to change. The second 100 volumes included only 84 by male authors, with Mrs. Gaskell and Charlotte Bronte making their first appearances, and for the third 100 volumes, the number fell to 68. By the time the series reached volumes 701 to 800, female authors were in a majority, accounting for 51 of the 100 volumes, and broadly it stayed at parity for the next 25 years. Between volumes 700 and 2700, or roughly from 1865 to 1890, I make it 1044 for the ladies and 956 for the men. Rather oddly, after that the pendulum swung back the other way, and for most of the rest of the series, through to the Second World War, male authors were in the ascendancy. 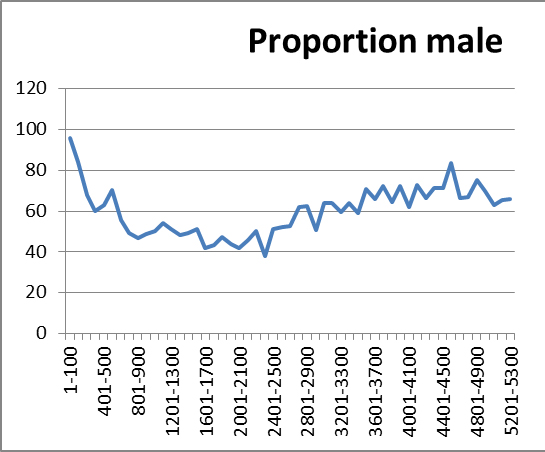 How can we explain this rather odd pattern? It seems unlikely that 1865 to 1890 was the golden age of female emancipation, only for male chauvinism to reassert itself at the end of the 19th century. I’d be interested in any other views, but my best guess is that it’s more to do with the type of novel than the gender of the author as such. This after all was the heyday of the sensation novel, with stories of secret marriages, bigamy, incest, crimes, misdirected letters, disguises and potions. Although male authors such as Wilkie Collins and Charles Reade were prominent in the genre, women authors played a large part too. One leading ‘sensation’ author, Mary Elizabeth Braddon, accounted on her own for over 100 volumes in the Tauchnitz series, and others such as Ellen Wood were scarcely less prolific.

A series of prolific women novelists, including Braddon and Wood, accounted for a high proportion of the volumes by female authors between 1865 and 1890. Others included Charlotte Yonge, Florence Marryat, Ouida, Margaret Hungerford, Dinah Craik and Margaret Oliphant. The work of these authors ranged far beyond sensation novels, but much of it was popular or romantic fiction. They are not much remembered today, although Virago has done much to re-popularise them.

The type of work that these novelists were producing was during that period in demand, and in practice there seems little evidence of authors being discriminated against because they were female. George Eliot took a male pseudonym, not because it was difficult for a female author to be published, but because works by female authors were often prejudged as light romantic fiction. She wanted her work to be taken more seriously.

My own experience of collecting Tauchnitz editions suggests that works by women authors are rather more difficult to find than those by male authors. Again, I suspect that this has little to do with gender and more to do with the type of fiction. Sensation novels and romantic fiction are generally harder to find than more ‘serious’ novels, whether by male or female authors. I guess this is because they were seen as more disposable and less often given fine bindings. Most of them were left as paperbacks, and suffered the usual fate of paperbacks over a period of 100 years.

After 1890 sensational fiction was less in demand and the more prolific authors of the following generation in the Tauchnitz series were mostly male – John Galsworthy, Rider Haggard, H.G. Wells, Bernard Shaw, Joseph Conrad, G. K. Chesterton, Rudyard Kipling, P.G. Wodehouse, Arthur Conan Doyle, Edgar Wallace – to name a few. It seems unlikely that this was the result of discrimination against women authors, although it may well have been discrimination against the type of fiction that was being written by women authors. I can’t say whether the change was limited to Tauchnitz or whether other publishers saw a similar shift at this time.

I suspect that if Tauchnitz were still around today, the balance would have swung back to a majority of female authors. My impression is that women today dominate the literary world, not only as authors, but as buyers and readers of books too. At least at the peak of its success, Tauchnitz would have recognised that trend.